This article is a description of TSP solver written in Python, using ants colony inspired algorithm. The algorithm is inspired by the behavior of ants and the way that they use pheromones to communicate. It belongs to larger group of algorithms inspired by Collective Intelligence.

“Collective intelligence is a shared or group intelligence that emerges from the collaboration and competition of many individuals and appears in consensus decision making in bacteria, animals, humans and computer networks”.

This article describes, how to make the ants, find the solution for TSP problem. Implemented in Python. Get the source from GitHUb. 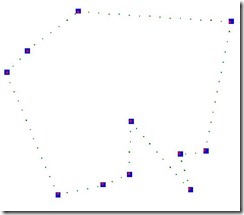 The algorithms based on the collective intelligence have some “interesting” properties:

These algorithms are inspired by the nature. Here are some examples of collective intelligence which can be observed in the nature:

There exist several applications of collective intelligence in engineering and optimization. The ants example has applications specially in routing. One of the basic problems which can be solved using an Ant colony is Travelling Salesman Problem.

Travelling Salesman Problem is a classical problem in the field of graph theory. Given n cities the salesman has to visit all of the nodes, come back to his starting location and and minimize traveled distance. Although the problem is NP - hard, several heuristic algorithms exists which obtain suitable results in polynomial time.

On the beginning the ants start to explore the graph. They choose their nodes randomly, until they visit all of the nodes. A this point the ant starts to copy his path back to his starting point. While he copies the path, on each edge he lays down certain amount of pheromone inversely proportional to the length of the tour. When each ant starts new route in each node he will compute the probability to choose an edge to continue his route. The probability of choosing edge e in each step is computed as follows.

The implementation in Python

Most of what I have learned and presented here was done during Collective Intelligence intensive course at Telecom ParisTech done by Jean-Luis Dessales, being part of the Athens program. The implementation was done in Python but as a module to a EvoLife program, which is a custom tool developed by Jean-Luis Dessales for scientific observations on genetic algorithms and collective intelligence algorithms. I have decided to make a stand-alone python program by taking the important bits out just for the Ants colony algorithm. I do almost never work in python, so for anyone out there if you see any big wrongdoing against the python culture, naming conventions etc, let me know.

The most important bits are in the Ant class.

The Action field remembers the Ant’s actual state. Each action has a corresponding method associated with it. The Node field holds the actual field. In ToVisit and Visited the ant stores the Nodes that he had already visited or that he needs to visit in order to achieve TSP completeness. Here is the “move” method which is called repetitively for each ant:

The most important of these method is searchNextNode, where the ant searches for his next edges to explore. In this method the behavior described in previous paragraph has to be defined.

We have to iterate over all the neighbor nodes in order to choose the right one. For each node the probability of taking the edge going to this node is computed according to the formula given in previous paragraph. Some remarks: the value of the pheromone on each edge is stored in a global array:  Land.Edge[nodeFrom][nodeTo]. Also the distances between all nodes are pre-calculated in Land.Distance[nodeFrom][nodeTo].

There is quite a lot of code, regarding the visualisation. The TkInter library was used for drawing. Also the PIL library has to be installed. It should not take too long the figure out the responsibility of each class. 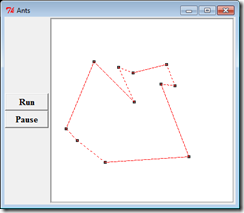 And here is the evolution of creating the final decision. First all edges have some amount of pheromone and during the time, the preferred edges are chosen. Because the ants choose the edges randomly on the beginning, the result is never assumed the same. The following three images show the evolution which resulted in quite not optimal solution. 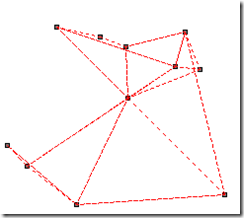 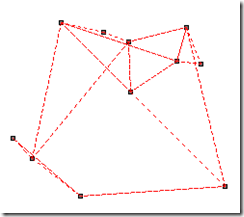 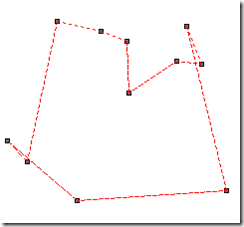 The quality of the solution depends heavily on the values of the coefficients. These values can be changed in the Program.py file:

Putting aside the coefficients described above, there is also PToShow value, which determines what is the minimal value of pheromone on the edge, in order for the edge to be dotted in the picture.

Before this implementation, I had one before – which was not at all efficient but quite funny. In this implementation the ants, could move freely around – there was no notion of edges. The ants simply took a directions towards a certain node and when they got close enough to it, they considered the node as reached and continued for the other one. This was useless, but I saved these funny graphics with the ants moving all around: 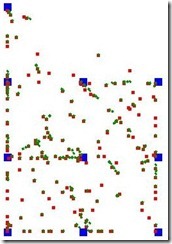 And the ants finding the solution: 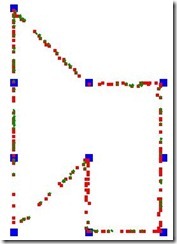 As said before, the source was created as a module to a larger program and later taken out to be executable isolated. Therefor there still is quite a lot of refactoring which could be done, but I do not consider it necessary, since the purpose is merely to present the Ant colony algorithm.