This posts talks about a tool which can help you convert lines in raster maps to a set of locations which later can be visualized using Silverlight Bing Maps (or some other mapping framework).

I call the application Silverlight Map Creator and it is available at http://mapcreator.codeplex.com/

This application can help you a bit when you have an existing map in a bitmap picture format (png, jpeg) and you would like to use the route lines from this map in your application.

Then you have two options:

Here is a screen shot of the Map Creator tool which will help you accomplish it: 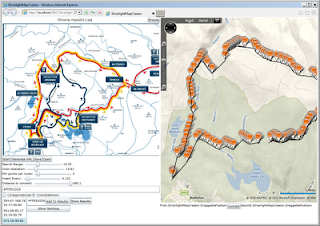 If you are wondering in the screenshot I am converting a map of a ski-race (www.jiz50.cz) to a set of points. In the left part you can see the map (jpg image) and in the right part the resulting route.

The task of converting raster image to map data is composed of the following parts:

To accomplish all of that the application has a simple menu:

Here are some details to the parts which are not straightforward:

Map Creator is not really sophisticated tool so it supports only the case when there is a Affine Transformation between the two coordination systems.

The relation between the two coordination systems can be specified using the following equation:

In Map Creator Just select the “Correspondences” radio button. Then every time you click “Right” on the image, a new point is added to a list, when you select the point and click right on the map a correspondence will be set.

Select colors of the route

Just select the “Color selection” radio button. Than when you click right button the mouse in the picture the color will be selected (and added to the list).

There are 4 parameters which somehow change the why the resulting route is going to look like: 1)Search Range - basically it says what is the minimal distance in pixels of points of the same route. Setting this parameter to bigger value will cause connections between routes which are normally not connected. To low parameter will increase the density of point in the route (which is not desirable either). 2) Color toleration - determines the color of the pixel which will still be marked as in the route. Each color is composed of 3 parts (RGB) with values in range 0-255. This parameter sets the tolerance for each part (RGB). Min Points Per Route - Each bike route is composed of several routes (or lets say lines). This is caused by side routes, which have to be represented separately. This parameter sets the minimal points for each route. If there is a route with less points that this parameter sets, it will not be added to the result. Distance to connect After the analysis, some routes which should be connected are will not be. Typical example are the side routes. There will always be a little space between the main route and the side routes. This parameter sets what is the maximal distance between to routes which should be connected.

Performing changes to the resulting route

There are two possible changes that you can do:

Adding the route the the results

Generally a map is composed of several routes. The basic idea behind this tool is that once you have finished working on a route, you can add it to the result (pressing the button on the list of colors). When the route is in the results it will not be affected by running the analysis again.

By pressing “Save” button you can save your work. Saved will be the list of correspondences and the routes in the “result” set. This why the next time you can continue working on existing map.

When you serialize this object to XML (here just using the standard C# serializer you will obtain XML with following structure:

OK, I agree - it is too verbose and not optimized and for most ugly, but I did not have time to implement my own format.

So that’s it. I am not sure that this tool will be useful to anyone, if you think that you might use it, if you have a suggestion or a bug, just leave me a note here…(ok not for the bugs, there is too many of them anyway).